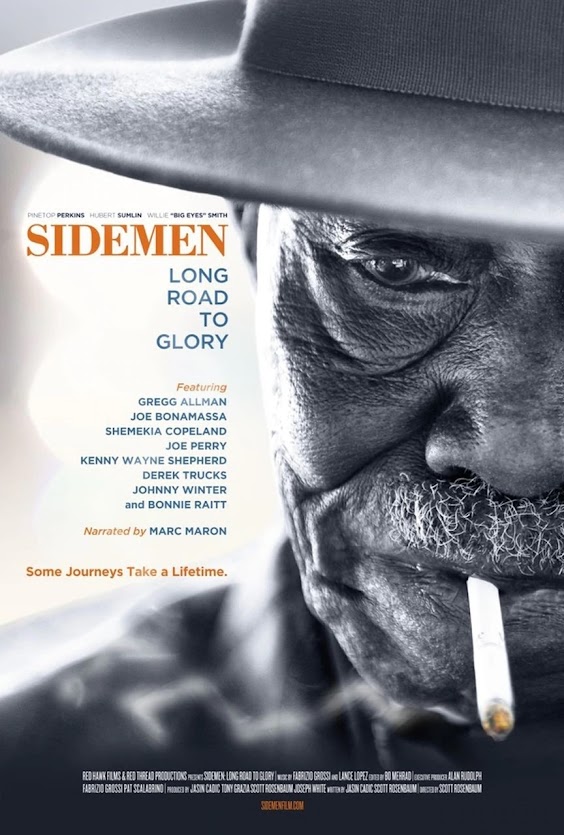 Sidemen: Long Road To Glory is an award-winning documentary film about the lives, legacies and music of bluesmen Hubert Sumlin, Pinetop Perkins and Willie "Big Eyes" Smith.  An exceptional documentary about some of the greatest unsung heroes of the music world, whose influence extends far beyond the blues.

This is an obvious labor of love for three extraordinary sidemen, that received their turn in the spotlight in their twilight years. Pinetop Perkins on piano, Willie Big Eyes Smith on drums and Hubert Sumlin on guitar all worked with Muddy Waters, although Sumlin spent most of his sideman career with Howlin' Wolf. Here each man gets his just due and Perkins and Smith receive a Grammy for their duo CD.  Sadly, during production, all three men passed away within months of each other. So we are left with this documentary as an excellent memory of what they brought to the blues.

After realizing how talented and influential these “Sidemen” were, their relative obscurity seems even more tragic. Hubert Sumlin, in particular, who seems like a shoe-in for the Rock and Roll Hall of Fame, hasn’t even been nominated despite his incredible contributions to the sound and style of generations of blues and rock and roll artists.  Overall, the film is beautifully shot, the story is well-told, the main characters are portrayed beautifully, and Mark Maron’s narration is excellent. This is a film every music fan ought to see. An essential music documentary. (Amazon)

When you witness these three musical masters perform with such proficiency and passion, you can't help but feel it deep in your heart.

Posted by Butterboy at 4:11 PM