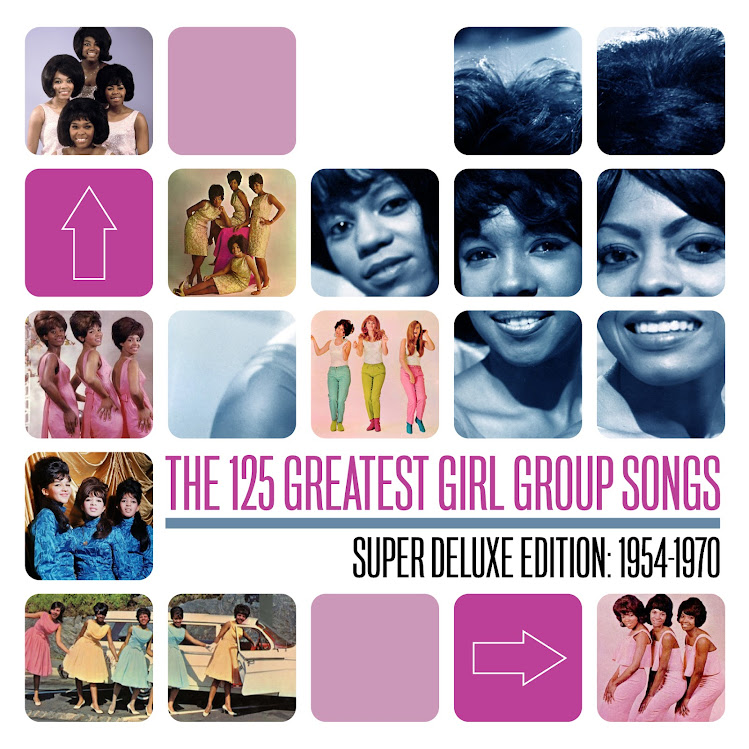 A girl group is a music act featuring several female singers who generally harmonize together. The term "girl group" is also used in a narrower sense in the United States to denote the wave of American female pop music singing groups, many of whom were influenced by doo-wop and which flourished in the late 1950s and early 1960s between the decline of early rock and roll and start of the British Invasion. All-female bands, in which members also play instruments, are usually considered a separate phenomenon. These groups are sometimes called "girl bands" to differentiate, although this terminology is not universally followed.

With the advent of the music industry and radio broadcasting, a number of girl groups emerged, such as the Andrews Sisters. The late 1950s saw the emergence of all-female singing groups as a major force, with 750 distinct girl groups releasing songs that reached US and UK music charts from 1960 to 1966. The Supremes alone held 12 number-one singles on the Billboard Hot 100 during the height of the wave and throughout most of the British Invasion rivaled the Beatles in popularity.  In later eras, the girl group template would be applied to disco, contemporary R&B, and country-based formats, as well as pop. A more globalized music industry gave rise to the popularity of dance-oriented pop music led by major record labels. This emergence, led by the US, UK, South Korea, and Japan, produced popular acts, with eight groups debuting after 1990 having sold more than 15 million physical copies of their albums. With the Spice Girls, the 1990s also saw the target market for girl groups shift from a male audience to an increasingly female one.

As the rock era began, close harmony acts like the Chordettes, the Fontane Sisters, the McGuire Sisters and the DeCastro Sisters remained popular, with the first three acts topping the pop charts and the last reaching number two, at the end of 1954 to the beginning of 1955. Also, the Lennon Sisters were a mainstay on the Lawrence Welk Show from 1955 on. In early 1956, doo-wop one-hit wonder acts like the Bonnie Sisters with "Cry Baby" and the Teen Queens with "Eddie My Love" showed early promise for a departure from traditional pop harmonies. With "Mr. Lee", the Bobbettes lasted for 5+1⁄2 months on the charts in 1957, building momentum and gaining further acceptance of all-female, all-black vocal groups.

However, it was the Chantels' 1958 song "Maybe" that became "arguably, the first true glimmering of the girl group sound". The "mixture of black doo-wop, straight beat rock and roll, and white pop" was appealing to a teenage audience and grew from scandals involving payola and the perceived social effects of rock music. However, early groups such as the Chantels started developing their groups' musical capacities traditionally, through mediums like Latin and choir music. The success of the Chantels and others was followed by an enormous rise in girl groups with varying skills and experience, with the music industry's typical racially segregated genre labels of R&B and pop slowly breaking apart. This rise also allowed a semblance of class mobility to groups of people who often could not otherwise gain such success, and "forming vocal groups together and cutting records gave them access to other opportunities toward professional advancement and personal growth, expanding the idea of girlhood as an identity across race and class lines." The group often considered to have achieved the first sustained success in girl group genre is the Shirelles, who first reached the Top 40 with "Tonight's the Night", and in 1961 became the first girl group to reach number one on the Hot 100 with "Will You Love Me Tomorrow", written by songwriters Gerry Goffin and Carole King at 1650 Broadway. The Shirelles solidified their success with five more top 10 hits, most particularly 1962's number one hit "Soldier Boy", over the next two and a half years. "Please Mr. Postman" by the Marvelettes became a major indication of the racial integration of popular music, as it was the first number one song in the US for African-American owned label, Motown Records. Motown would mastermind several major girl groups, including Martha and the Vandellas, the Velvelettes, and the Supremes.

Other songwriters and producers in the US and UK quickly recognized the potential of this new approach and recruited existing acts (or, in some cases, created new ones) to record their songs in a girl-group style. Phil Spector recruited the Crystals, the Blossoms, and the Ronettes, while Goffin and King penned two hit songs for the Cookies. Phil Spector made a huge impact on the ubiquity of the girl group, as well as bringing fame and notoriety to new heights for many girl groups. Phil Spector's so-called Wall of Sound, which used layers of instruments to create a more potent sound allowed girl groups to sing powerfully and in different styles than earlier generations. Jerry Leiber and Mike Stoller would likewise foster the Exciters, the Dixie Cups, and the Shangri-Las. The Shangri-Las' hit single, "Leader of the Pack", exemplified the "'death disc' genre" adopted by some girl groups. These songs usually told the story of teenage love cut short by the death of one of the young lovers.

The Paris Sisters had success from 1961 to 1964, especially with "I Love How You Love Me". The Sensations, the Chiffons, the Angels, and the Orlons were also prominent in the early 1960s. In early fall 1963 one-hit wonder the Jaynetts' "Sally Go 'Round the Roses" achieved a mysterious sound quite unlike that of any other girl group. In 1964, the one-hit wonder group the Murmaids took David Gates' "Popsicles and Icicles" to the top 3 in January, the Carefrees' "We Love You Beatles" scraped the top 40 in April, and the Jewels' "Opportunity" was a small hit in December.

Over 750 girl groups were able to chart a song between 1960 and 1966 in the US and UK, although the genre's reach was not as strongly felt in the music industries of other regions. As the youth culture of western Continental Europe was deeply immersed in Yé-yé, recording artists of East Asia mostly varied from traditional singers, government-sponsored chorus, or multi-cultural soloists and bands, while bossa nova was trendy in Latin America. Beat music's global influence eventually pushed out girl groups as a genre and, except for a small number of the foregoing groups and possibly the Toys and the Sweet Inspirations, the only girl groups with any significant chart presence from the beginning of the British Invasion through 1970 were Motown girl groups with the Supremes being the only girl group to score number one hits. The distinct girl group sound would not re-emerge until the 21st century, where it would influence modern-day English-speaking pop-soul soloists who have been met with international success, such as Amy Winehouse, Adele, Duffy and Melanie Fiona among others. In addition to influencing individual singers, this generation of girl groups cemented the girl group form and sentiment and provided inspiration for many future groups.

After considerable and extensive online research, plus my own recollections and memories, here is my personal compilation of what I consider to be the 125 greatest girl group songs from the original golden age era of 1954-1970.  Compiled as always using the very latest and highest quality digital remasters for superior sound quality and enjoyment.

03 The Shirelles Will You Love Me Tomorrow 2:41

09 Martha and The Vandellas Dancing in the Street 2:40

12 Martha and The Vandellas Nowhere to Run 2:52

24 The Supremes My World Is Empty Without You 2:35

35 Martha and The Vandellas Come and Get These Memories 2:28

40 Martha and The Vandellas Quicksand 2:46

42 The Supremes When the Lovelight Starts Shining Through His Eyes 3:06

49 The Velvelettes He Was Really Sayin' Somethin' 2:28

54 The Marvelettes The Hunter Gets Captured by the Game 2:49

65 The Velvelettes Needle In a Haystack 2:31

78 Reparata and The Delrons Whenever a Teenager Cries 2:49

79 The Murmaids Popsicles and Icicles 2:31

123 The Flirtations Nothing But a Heartache 2:41

Posted by Butterboy at 5:14 PM