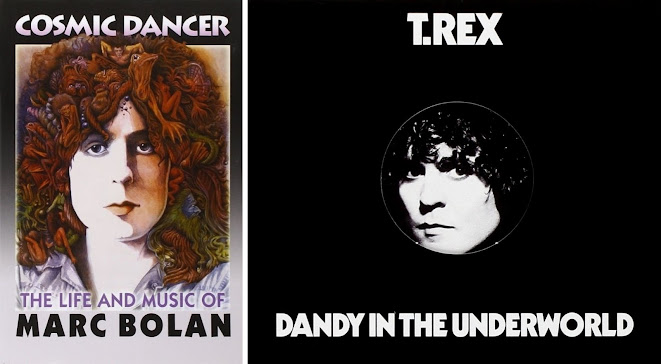 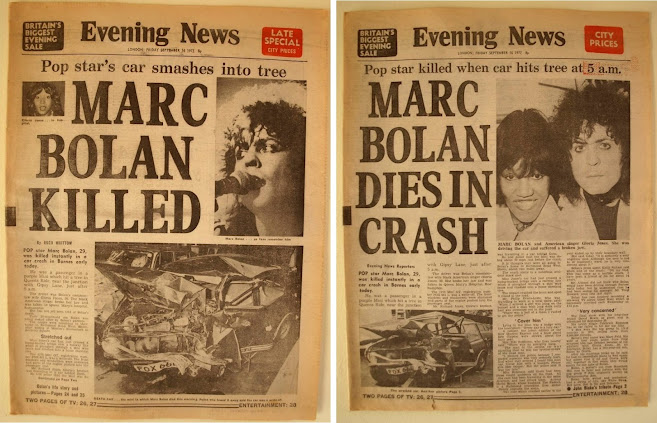 Marc Bolan born Mark Feld; 30 September 1947 – 16 September 1977) was an English guitarist, singer and songwriter. He was a pioneer of the glam rock movement in the early 1970s with his band T. Rex. Bolan was posthumously inducted into the Rock and Roll Hall of Fame in 2020 as a member of T. Rex.

Marc Bolan, the biggest pop star in post-Beatles Britain, was haunted by the fear that he would die before his 30th birthday. He repeatedly told friends, family and colleagues that he had foreseen his own death in a car crash and that the car would be a mini. He had alluded to the tragedy in several songs and a poem in which he named the tree that would become a shrine to his grieving fans. It is said that he had also known the date of his death, gleaned from a painting, titled 'The Sixteenth of September' by the Belgian surrealist Rene Magritte which foreshadowed an iconic image on the cover of his 'The Slider' album. Whatever the truth, it is a fact that on that very date in 1977, two weeks short of his 30th birthday, Bolan's morbid prophecy was fulfilled. In this definitive new biography Paul Roland chronicles the life and music of the vibrato-voiced glam rock idol and 20th century boy who created some of the most instantly appealing and enduring songs of the 70s -- 'Ride A White Swan', ''Hot Love', 'Get It On', 'Telegram Sam', 'Children of the Revolution' and 'Solid Gold Easy Action' -- in what appears to have been a fevered rush to cheat Fate. At the peak of his popularity in 1972 the Beatles acknowledged Bolan and his group T-Rex as their natural successor and Ringo Starr directed the film that brought the fan hysteria known as T-Rextasy to a stagnant British pop scene and which was to top the DVD charts 30 years after its original release. That year the former working class Hackney mod launched his own label and continued a run of number one hits that accounted for 3.5% of the total singles sales in the UK, outselling the combined singles sales of Jimi Hendrix and The Who. But just when Bolan was at the summit of his success it all went sour. This is the incredible story of Marc Bolan's roller-coaster rise to fame and his resurrection as the self-styled 'Godfather of Punk' that promised to put him back on top until the fatal accident which cut short his life and hopes of a comeback.

On the 20th anniversary of his tragic death, Ch4 TV (UK) made this documentary. From September 1997

Documenting the life story of T.Rex singer, Marc Bolan, in the 40th Anniversary of his death. Featuring appearances accounting his life from Tony Visconti, Andy Ellison, Gloria Jones and June Child.  This intimate biography, narrated in Marc Bolan's own words, traces his remarkable journey from Hackney's 'king of the mods' to Tyrannosaurus Rex, as he evolved into the artist known as 'the hippie with a knife up his sleeve'.  With the dawn of the 1970's and the breakup of The Beatles, Bolan became the gender-bending glam rocker whose band T. Rex revitalised the British music scene. But director Jeremy Marre - incorporating unseen movies shot by record producer Tony Visconti and Marc Bolan himself - reveals a far more complex and driven figure whose life was tragically cut short, aged 29.  Featuring those who were closest to Marc, his friends, colleagues, family, partner Gloria Jones and producer Tony Visconti.

Posted by Butterboy at 7:02 AM