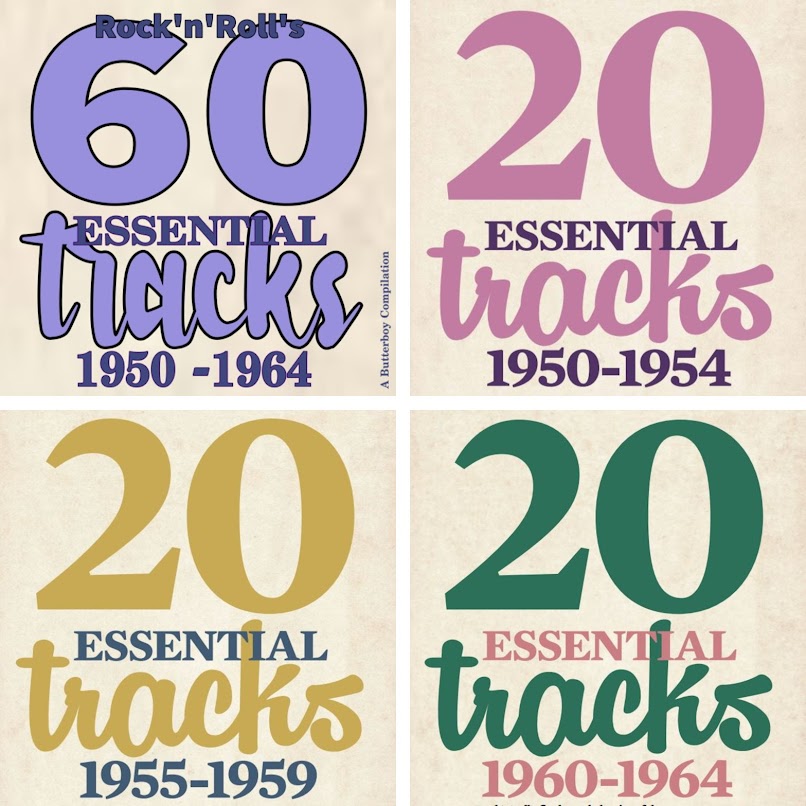 I was reading an Article from Vintage Rock Magazine presented as a 3 part special where they identified a list of 60 Essential Songs that reflected The Rock'n'Roll Years between 1950 - 1964. It's a realy good list.

Rock’n’roll may not have been fully formed quite yet, but throughout the first half of the decade pioneering records emerged that helped forge the sound of its second half… In the 1956 film proclaimed: “Rock and roll is a river of music that has absorbed many streams: rhythm and blues, jazz, ragtime, Rock, Rock, Rock cowboy songs, country songs, folk songs… All have contributed to the big beat.”

The first half of the decade sprung into life thanks to the sizzling rhythm and blues that leapt from the juke joints to blow up the airwaves, alongside a handful of prototype rockers waxed by artists toying with a new sound. The second half was to elicit a revolution: a sea change in mainstream culture spearheaded by those fresh-faced upstarts who’d been tuning in and making plans to recast the magic as something entirely their own.

As the 60's began, the renegade spirit of the previous decade was rapidly changing form. era embodied in the swinging hips of Memphis’ That revolutionary megastar, fi red up via the stinging guitar licks of Cliff Gallup and pounded out by the likes of Little Richard and Jerry Lee Lewis, was on its way out, soon to make way for a raft of new sounds. Several major events played their part. First, the shrieking soul of rock’n’roll clammed up as Little Richard denounced the big beat and turned to God and gospel, Jerry Lee’s career was capsized by his marriage scandal, and Elvis shipped off to the army. Then, of course, in 1959, news of the ill-fated flight that took the lives of Richie Valens, Buddy Holly and The Big Bopper cut deep. By the year’s end Chuck Berry was looking at two years behind bars, while rock’n’roll’s once-irrepressible mouthpiece, DJ Alan Freed, felt the brunt of payola. And then, yet more tragedy hit as 1960 got underway and one of rock’s fi nest Foot soldiers, Eddie Cochran, was also struck down. Meanwhile, back from the army, Elvis commenced a Hollywood career that would replace the wild up curled lip for the saccharine smile of an all-American boy.

The record execs, on the other hand, had landed with their bums in the butter, capitalising on the rise of the teenager. What was once a hard-won rebellion was gently being ruddered towards a cleanercut vision of tomorrow. The pure rockabilly hump that had defined the previous years was muted, with many of the original rockers either fading quietly into the background or adapting to survive with a mainstream palette of doo-wop, pop, country and R&B. Add a new breed that mixed up a fresh folk formula with an eye on social change and the climate had soon changed irreversibly. But all was not lost. The age of the teen heartthrob was ushered in, all East Coast doo-wop and dreamy girl-group harmonies, while surf music rode over from the shores of California, and the wonders of Motown fi red up. Up in the north of England, picking up the mantle left them by their rocking heroes, Liverpool’s mighty foursome began a rapid ascent – from Love Me Do to full-blown Beatlemania by 1964. And far from casting a shadow over the charts, it all amounted to some of the fi nest pop music ever made. What follows is just a snapshot of the sounds that soundtracked that first fascinating run – yet another glorious time to be alive! (Vintage Magazine)

I have used the list in the Vintage Rock magazine to make this great compilation. Also included are the 3 magazines that contain the lists. They are really enjoyable reading too.

25 Jackie Wilson Reet Petite (The Finest Girl You Ever Want To Meet) 2:44

Posted by Butterboy at 7:11 AM