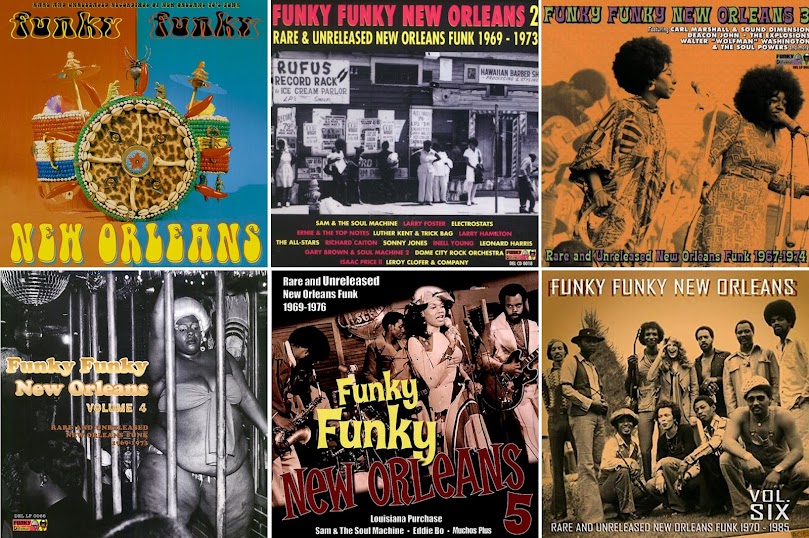 Vol. 01     When Tuff City began releasing these Funky Funky New Orleans compilations in the late 90's, every track was a revelation. Any funk enthusiasts who only knew the Meters and Eddie Bo could learn there was a whole lot more where that came from, each track grittier and more whacked-out than the last one. By the time the label got to Volume 5, it was using acetates credited to “Unknown Artist,” and even those tracks were killer. (offbeat.com)

Vol. 02     The second installment in Funky Delicacies' excellent exploration into the unearthed funk gems of New Orleans spans 1969-1973, which some may argue are the glory years for raw funk and soul. But in contrast to the previous volume, this second installment takes an eclectic look at the diversity and versatility of the scene. The sophistication and undisputable Memphis influence found on Dome City Orchestra's "Quiet Village" contrasts nicely with Wardell Quezerque's distinctive production and arrangement style found on the Enticer's "Theif" and Larry Hamilton's "Gossip" and "Keep the News to Yourself." The contrasts from one group to another are noticeable to even the most novices of ears; hints of Curtom, Motown, Stax, and Philly labels are all evident, but like everything else good about New Orleans, it makes jambalaya out of these influences and presents a sound distinct but unified. (Amazon)

Vol. 03     This third compilation in the excellent Funky Funky New Orleans series features a blend of well-worn rarities and treasures that will please beatheads and soul fanatics alike. Contributions from Big Easy fixtures Burnt Toast & Coffee, Wolfman Washington, and the Explosions all balance more obscure tunes and tracks from anonymous male singers that are as party-friendly as they are soulfully inspired. (Allmusic review by Rob Theakston)

Vol. 04     This fourth installment in the excellent Funky Funky New Orleans series not only features one of the most jarring covers ever to grace a funk records compilation, but some of the deepest cuts as well. Several songs from the highly revered JB's label make their first appearance on compact disc here, including "The Monkey That Became President" by the Brotherhood, Larry Jones' outstanding "Funky Jaws" (both vocal and instrumental versions), and the consistently excellent Fantoms with "Turn Me On." Not the strongest in the series, but collectors and beatheads will find this to be the most obscure and eclectic of the bunch. (AllMusic review by Rob Theakston)

Vol. 05      This latest in the series of rare funk releases on Tuff City’s Funky Delicacies imprint shows that the vast reserve of unheralded groove from the Crescent City’s salad days remains undepleted. Folks who think the Meters invented New Orleans funk and then died with it are gonna have a field day with this release, expertly restored as usual from the vaults of defunct and wonderfully monikered labels like Power Funksion and Hep Me. Indeed, six of these 17 tracks have never been heard by the general public at all, and the closest thing to a recognizable hit here is Deacon John’s “You Don’t Know How (To Turn Me On)” from Bell. Aside from one Eddie Bo track (a very Ike and Tina duet with Inez Cheatham on “Lover and a Friend”), the names here are likely to sail past most heads not bobbin’ in town back in the day. If you know who the Louisiana Purchase, the Top Notes, and the Dome City Orchestra are, however, listen up.  There are no real “lost classics” here for anyone not besotted with deep funk, but the sound’s good—as good as it can be, anyway, considering that some of these original masters are long gone—and while New Orleans funk from this period isn’t much different than what was going on in other cities, it was, as you might imagine, more syncopated and unselfconsciously gritty at a time when even Memphis artists were starting to sweeten their sound. It’s also a lot of fun, given how Muchos Plus turn “I Shot The Sheriff” into “Funky Sheriff” by simultaneously building off of and mocking Eric Clapton’s version and how Dome City Orchestra perform similar miracles with Earth Wind and Fire’s “That’s The Way of the World” on the instrumental “Higher, Higher.” It’s the kind of sound that practically has bell-bottoms on it, but if you like it deep and rare, the FFNO series will deliver. (offbeat.com)

Vol. 06     After a twelve-year break, the series is back—sort of. Volume 6 is a vinyl-only release, clocking in at a scant half-hour, and instead of newly unearthed tracks, we get mostly songs that have been compiled before. There’s one real find, though: “(What’s His Name) Black Samson” is the theme song from a little-known 1974 Blaxploitation movie, which was scored by Allen Toussaint and featured the Meters throughout, with future short-time Meters member Willie West singing the theme. It makes you wish for a reissue of the complete soundtrack (if you’re really curious, the whole movie’s on YouTube). Elsewhere there’s more Meters history with George Porter Jr’s late ’70s band Joy Ride—which veers into more expansive P-Funk territory—and the equally short-lived Sam & the Soul Machine, with Zigaboo Modeliste on drums. Eddie Bo’s “Stink Bomb” comes from the ’80s, when he was trying his luck with relatively straight-ahead jazz funk. My favorite track here is probably the least rare one: Robert Parker’s “The Hiccup” was a later and far quirkier attempt to come up with a dance-craze song in the “Barefootin’” vein.   It’s mostly first-class stuff, but aside from the Willie West track, confirmed funkateers will already own most of it. After all these years, there are only so many fresh muthas left in the motherlode (offbeat.com)

11 New Orleans All Stars When the Saints Go Marching In (Saints Boogaloo at Halftime) 4:05

15 Larry Hamilton Keep the News to Yourself 2:54

06 Larry Hamilton My Mind Keeps Playing Tricks On Me 2:52

08 Raymond Winnfield; Ernie Vincent and his Top Notes Things Could Be Better 3:07

11 Louisiana Purchase Accept What You Expect 3:10

02 Louisiana Purchase Accept What You Expect 3:10

05 George Porter's Joy Ride Da Boys From Across The Tracks 5:17

06 Raymond Winnfield Things Could Be Better 3:06

Posted by Butterboy at 7:05 AM