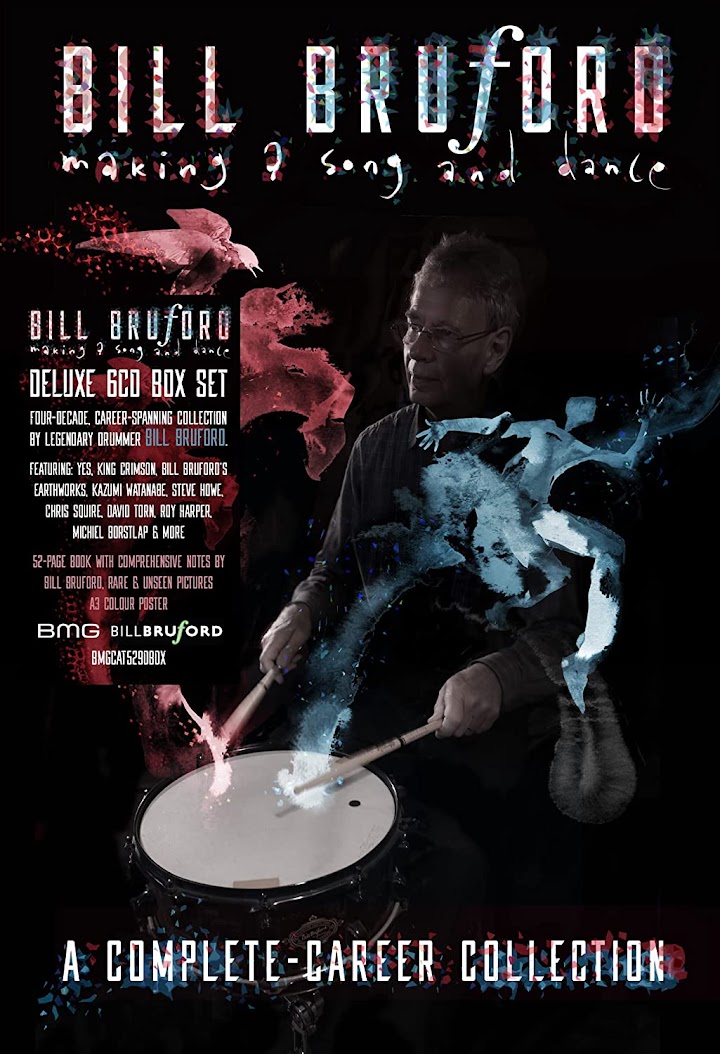 For this anthology, Bruford has selected 70 tracks from across his whole career, comprising works from some 23 different artists and bands over a 40-year period.

Having played with Yes, King Crimson and Genesis, Bill Bruford can truly claim to be the godfather of prog drummers. But, as this six-CD retrospective shows, that was just a small part of a 40-year career that includes his own bands as well as a dizzying array of collaborations with proggers, jazzers… and Roy Harper.

A box set from a drummer might sound like a daunting prospect, but rest assured there are no drum solos (Bruford didn’t do them), although obviously there’s a lot of drumming – but always with other musicians. It’s also a surprisingly varied collection, which is down to Bruford’s restless but erudite style that changed according to the setting he was in.  His prog credentials are explored on the first two CDs, although the band he co-founded, Yes, gets just three tracks, but Heart Of The Sunrise tells you most of what you need to know about his contribution to that band.   You get a better idea of his scope on his three stints with King Crimson as he varies his style – and his kit – to match Robert Fripp’s more intellectual approach as well as his aversion to cymbals. The best of the 15 Crimson tracks is a magnificent live version of Indiscipline.  There’s nothing from his brief spell with Genesis in 1976, immediately post-Gabriel, as he only toured with them. But he does squeeze in a 1978 track from UK, a prog outfit that also included John Wetton, Allan Holdsworth and Eddie Jobson.  Things turn jazzy on CD3 as Bruford’s solo career gets under way, with half a dozen tracks from his late-70s albums, highlighted by the sparkling, Weather Report-styled Joe Frazier, before getting stuck into his Earthworks band which spreads over on to CD4 and features Triplicity, arguably the track that best shows off Bruford’s technique, although a live version of Nerve comes close.  Roy Harper leads off CD5, titled ‘Special Guest’, with a couple of tracks from his HQ album, followed by other album sessions with Chris Squire, Steve Howe, Al DiMeola, David Torn and Kazumi Watanabe.   The final disc, ‘The Improviser’, has more off-the-wall collaborations with Patrick Moraz, David Torn and Dutch pianist Michiel Borstlap, plus King Crimson’s No Warning, which is as close to a drum solo as you’ll get.    (www.loudersound.com)

If you are a prog fan and are in the know then you'll be aware of the work of Mr. B.  Whether he is doing prog rock or jazz fusion he is a true great. This box set is organized in a unique way.

Posted by Butterboy at 7:07 AM