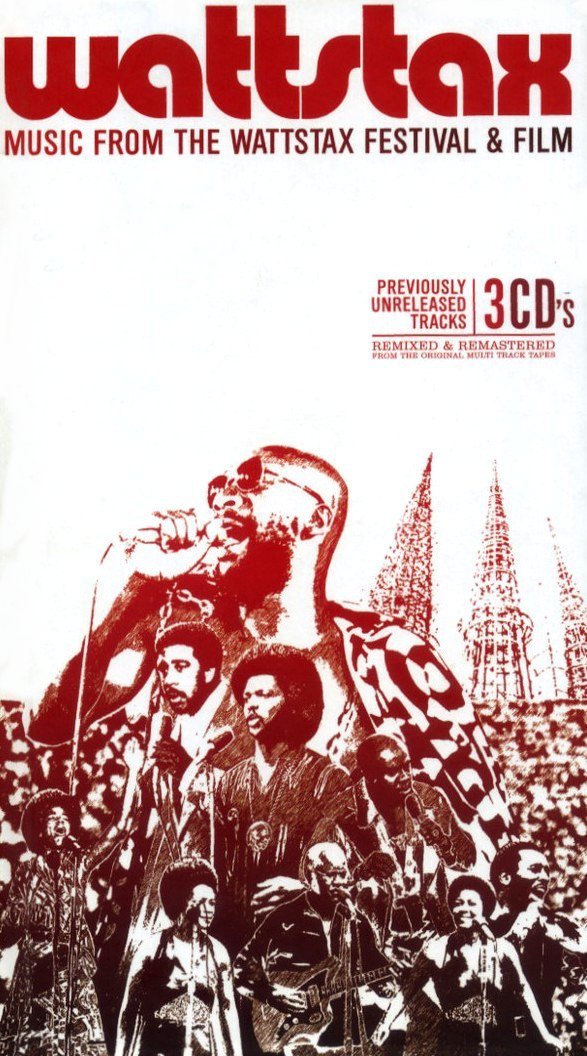 In the summer of 1972, Stax Records had an idea that was larger than life. Stax’s co-owner, Al Bell, had wanted to expand the soul label’s West Coast presence and develop its Stax Films arm. The ideal way to do both was to stage the biggest soul concert in history — termed by one former staff member “the black Woodstock” — right in the center of South Central Los Angeles, a vast portion of which had been destroyed by fire in the Watts Riots. The concert, called Wattstax, proved a crowning moment for Stax as 112,000 people united at the Los Angeles Coliseum in a spirit of joy, pride and celebration. The resultant movie was a blockbuster and plays to this date in many music film festivals. And now the original two-LP soundtrack has been expanded to three CD's, including material from the original Wattstax album (which sold seven million copies in the SoundScan era alone) as well as from its sequel, Wattstax: The Living Word, along with samplings from Wattstax-related individual artist albums released in 1972-73.   This is the first domestic reissue of the complete Wattstax soundtrack, housed in a collectible Digipack featuring rare photographs and reproductions of vintage Wattstax-era posters. The package also contains a multi-page booklet on the story of Wattstax by noted soul music historian Rob Bowman and has been digitally remastered from the original tapes.

The expanded Wattstax volume features many Stax artists whose careers were surging in the early ‘70s: namely Isaac Hayes, The Staple Singers, Carla Thomas, Rufus Thomas, Johnnie Taylor, Eddie Floyd, William Bell, The Bar-Kays, The Emotions, Albert King, Little Milton, The Rance Allen Group, David Porter, The Soul Children, Mel & Tim, Fredrick Knight, Deborah Manning, Little Sonny and Richard Pryor. The set includes such hits as “Respect Yourself,” “I’ll Take You There,” “Gee Whiz,” “Theme from Shaft,” “Son of Shaft,” “Do The Funky Chicken,” “Backfield in Motion,” “Knock On Wood,” “Steal Away” and more — 47 songs in all on three CDs.  In addition to music from the concert, Stax filmed and recorded its artists all around town in clubs, churches and even in the studio. The expanded Wattstax anthology includes the best of the live festival from Wattstax and Wattstax: The Living Word plus a slew of previously unreleased festival performances, selected tracks from the club and church recordings staged during the week of the festival, and selected bits by comedian Richard Pryor that were recorded at the Summit Club in Los Angeles. Pryor’s contributions were originally used in the Wattstax film to connect the music performances with man-on-the-street commentary on issues that were then pertinent to black America. Included also is an introduction by the Rev. Jesse Jackson – himself a Stax spoken-word recording artist at the time.  Wattstax was hoped to be the first step in a series of urban festivals and movies to be produced by Stax, but sequels were never to materialize. The festival hit the zeitgeist of black America at that point in time. And 35 hot summers after the festival, the music sounds as fresh as ever. (concord.com)

The first CD includes many of the lesser known stars of Stax and that wonderful southern soul sound, from the gospel of Deborah Manning & Little Sonny to the amazing voices of Lee Sain, Louise McCord & Lee Bell.  The second CD includes many of the songs you probably have heard from the album and previous CD (import) versions you might have bought, such as The Bar-Kays and The Emotions, but now with the inclusion of David Porter's set, including the blistering "Introduction," this will blow your speakers out and stand your hair on end!   The third CD is where the meat of the disc really lies, though, from the opening track of Little Milton's "Open The Door To Your Heart", Mel and Tim's Motown tribute of sorts "Backfield In Motion", a double shot of two of the greatest bluesmen who ever played it, Johnnie Taylor and Albert King, to the double shotgun blast of both daughter Carla and father Rufus Thomas, and as you may have seen from the film, when Rufus proudly struts onto the stage in his hot pink shorts/vest/jacket/cape ensemble with white go-go boots, announces "Ain't am clean?!?" and shouts to the band if they're ready, worthy of James Brown, you know "The Breakdown, Part 1" and "Do The Funky Chicken" is coming! The Soul Children give us their best Sam and Dave and then Isaac Hayes comes on very quickly, sings for three minutes... and that's it? (Amazon)

Wattstax is as important an American musical event as Woodstock, and to be honest, looking at both with an unbiased eye (and ear) had a much deeper meaning to it.

03 Rance Allen Group Lying On The Truth (Live From Wattstax) 3:41

09 David Porter Ain't That Loving You (For More Reasons Than One) 3:31

13 The Soul Children I Don't Know What This World Is Coming To 6:53

Posted by Butterboy at 7:42 AM