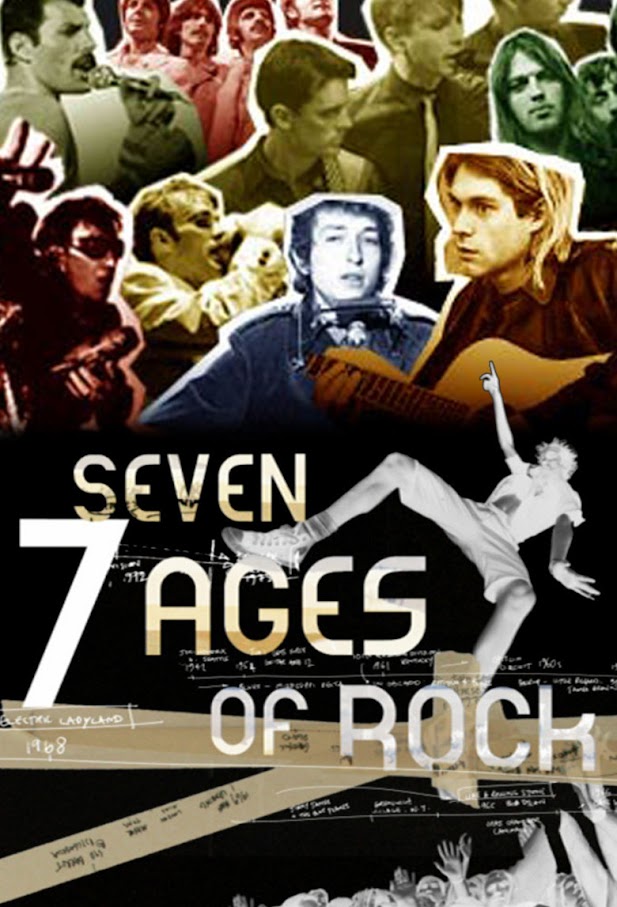 Seven Ages of Rock (also known as 7 Ages of Rock) is a BBC Two series, co-produced by BBC Worldwide and VH1 Classic in 2007 about the history of rock music.

Seven Ages of Rock's comprised six 60-minute episodes, with a final episode of 90 minutes, and was broadcast on Saturdays at 21:00 (repeated on BBC One on Sundays). Each episode focused on one type of rock music, each typified by one or two artists or bands. The series producer was William Naylor, and the executive producer for the BBC was Michael Poole, a former editor of the 1990's BBC music, arts and culture programme The Late Show. The production was based at BBC Bristol and each programme was narrated by Julian Rhind-Tutt on the BBC and Dennis Hopper on VH1 classic. The series also included additional material broadcast on BBC radio and available on the BBC website.

The rock revolution of the 1960's seen through the life and music of Jimi Hendrix.  The first doomed icon of rock,  Hendrix was the synthesis of everything that had gone before him and all that was to come.  The Birth Of Rock also explores the influence of rhythm & blues on a generation of British musicians such as The Rolling Stones, Cream and The Who, and how the song-writing of Bob Dylan and studio developments of The Beatles Transformed the possibilities and ambitions of rock.

The story of how artistic and conceptual expression permeated rock.  From the pop-art multi-media experiments of Andy Warhol and the Velvet Underground to the sinister gentility of Peter Gabriel's Genesis, White Light, White Heat traces how rock became a vehicle for artistic ideas and theatrical performance.  We follow Pink Floyd from the fated art school genius of Syd Barrett through the global success of Dark Side of the Moon to the ultimate rock theater show, The Wall, Along the way, the film explores the retro-futurism's of Roxy Music and the protean world of David Bowie.

A tale of two cities, London and New York and the bird of punk.  Each city created a bastard child that marked the biggest and fundamental shift in popular music since Elvis walked into Sun Studios.  Blank Generation unpicks the relationship between the bankrupt New York and the class and race-riven London of the mid-1970's and explores the music of The Sex Pistols, The Clash, Ramones, Television, Patti Smith, The Damned and Buzzcocks.

The story of the longest surviving and certainly the loudest genre of rock, heavy metal.  With no sign of disappearing, metal has been the most controversial and misunderstood of all rock genres.  Emerging at the tail end of the hippy dream from the rust belt of industrial England, heavy metal would go on to secure the most loyal fan base of all.  With Black Sabbath as the undisputed Godfathers, we follow their highs and lows, and, along the journey, meet Deep Purple, Judas Priest, Iron Maiden and Metallica.

We Are The Champions follows the development of some of the biggest names in Rock, among them Queen, Bruce Springsteen, The Police and Dire Straits and shows how, through events such as Live Aid and the rise of MTV, rock achieved a global influence on culture and politics.  The film concludes in the early 90's, as U2 effectively brought the era to a close by reinventing the big rock show so completely, that fifteen years later most major rock tours are still pale facsimiles.

The rise of alternative rock in the USA.  From it's early underground days where bands like Black Flag drew inspiration from the DIY ethos of punk, Left Of The Dial traces the history of the network of fans, clubs and fanzines that sustained the scene and launched the careers of bands like REM, The Pixies and Husker Du.  The film takes a fresh look at the explosion of the Seattle scene, culminating in the success of Nirvana's 'Nevermind' and the tragic loss of Kurt Cobain, an artist who's triumph and tragedy continues to cast an inescapable shadow.

The story of British Indie, beginning with The Smiths, the archetypal indie group.  The film follows The Stone Roses as the heirs to the indie crown, Suede's dark sexuality and the media saturation of Brit-pop's Blur v Oasis.  What The World Is Waiting For explores how indie ultimately lost it's once cherished intimacy and integrity in front of 250,000 fans at Oasis's Knebworth spectacle in 1996 and how, by returning to it's roots in clubs and bars (and even front rooms) with bands such as Franz Ferdinand, The Libertines and The Arctic Monkeys, indie became respectable again.

Meddle, Dark Side Of The Moon

Ziggy At The Rainbow

The Godfathers Of Rock

Anarchy In The UK

God Save The Queen

Ever Fallen In Love

Born In The USA

The One I Love

Something In The Way

Automatic For The People