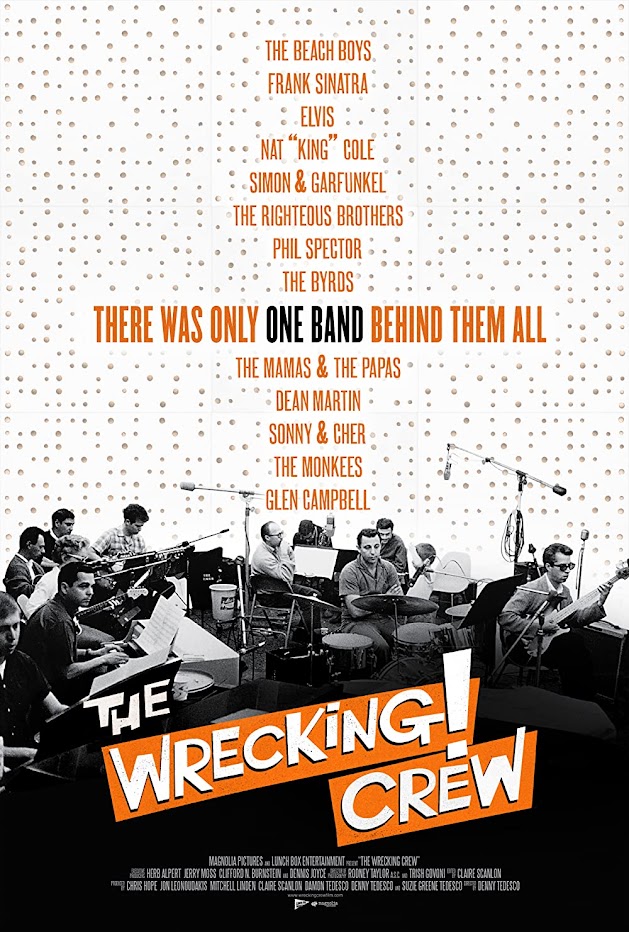 The Wrecking Crew is a 2008 American documentary film directed by Denny Tedesco, son of guitarist Tommy Tedesco. It covers the story of the Los Angeles–based group of session musicians known as the Wrecking Crew, famed for having played on numerous hit recordings throughout the 1960's and early 1970's. The film premiered at the 2008 South by Southwest Film Festival.

Popular music of the 1960s was dominated by young bands like the Beach Boys, the Mamas & the Papas, Jan and Dean, and the Monkees. Listening to rock and roll on jukeboxes and car radios created devoted fans of these groups, whose music communicated the optimism and sorrow of a generation contending with strong counter-cultural forces.  Record companies happily supplied the public with new songs and musical groups, all packaged with artistic photographs and biographical profiles. Left out of the story was an important historical fact: the bands, in some, but not all, cases, did not play the instruments heard on their records. Instead, the task of recording the perfect tempo, pitch, and timbre fell to a small group of accomplished session musicians.

The Wrecking Crew documents the work of studio players who recorded the tracks for such hits as "California Dreamin'", "These Boots Are Made for Walkin'", "Be My Baby", "The Beat Goes On", and "Good Vibrations". Interviews with producers, engineers, and session musicians reveal the warmth and humor that allowed their collective talents to turn a simple chord chart into an international phenomenon. (Wikipedia)

If you love learning about music and the music-makers, this is a must-watch documentary! You'll know the music, but you'll learn you never really knew who was behind the music. I wish I could meet and shake the hands of every person featured in this film to thank them. Hats off to Denny Tedesco for his work and perseverance in pulling this all together.

The film cast included the following musicians and performers, in live appearance and archived footage

Posted by Butterboy at 4:49 PM