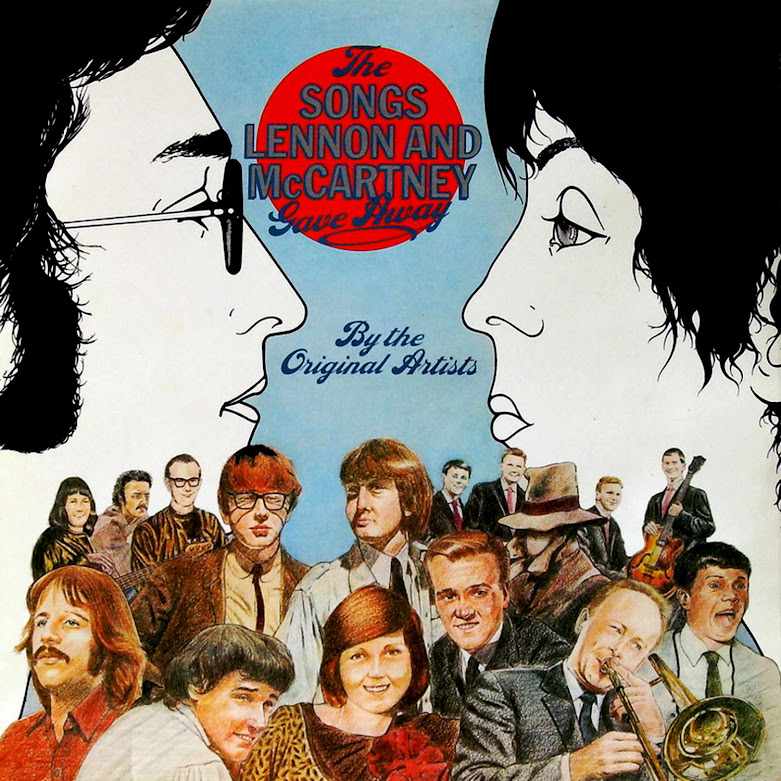 The Songs Lennon and McCartney Gave Away was a conceptual compilation album containing the original artist recordings of songs composed by John Lennon and Paul McCartney in the 1960s that they had elected not to release as Beatles songs. The original album was released in the UK on EMI’s mid-price Music for Pleasure label in 1971.  The album was reissued by EMI in 1979 with a 1973 Ringo Starr track added.

Songs that had been intentionally written for other artists.

In the earliest days of their songwriting partnership, Lennon and McCartney expressed a desire to emulate the success of composing duos such as Goffin & King and Leiber & Stoller in having their compositions recorded by other artists, so this was an aspect of the songwriting craft that they were interested in pursuing.

With the encouragement of the Beatles’ manager Brian Epstein, they supplied some of their songs deemed unsuitable for the Beatles to fellow artists, several of whom were also managed by Epstein and were friends with Lennon and McCartney. Once the Beatles’ initial success in early-mid 1963 mushroomed into a phenomenon, there was great interest in songs written by the Beatles “in-house” writing duo. Artists began clamouring to secure original Lennon–McCartney songs knowing that there would automatically be media and public interest in such songs.  The quality of the songs and the subsequent commercial success of such songs added to the demand by artists for even more compositions.

In 1970, music writer Martin Lewis, who in 1967 had compiled the discography for Hunter Davies’ authorised biography of the Beatles, proposed that EMI should release a compilation album based on the section of his Beatles discography that focused on these songs. EMI accepted the proposal and the album compiled by Lewis was released by EMI’s Music For Pleasure label in 1971. All of the songs on the album were recorded in the 1960's while the Beatles were still active, and all of the tracks had been released as singles.

The 1979 reissue was essentially the original 1971 album with the addition of “I’m the Greatest“, a Ringo Starr album track written for him by John Lennon in 1973; this was at variance from the original concept of the album being only songs written by Lennon/McCartney, and recorded and released as singles during the active Beatles years in the 1960's. “Penina” was written by McCartney at the Hotel Penina in December 1968, when he was vacationing in the Portuguese region of the Algarve. The song was first recorded by the hotel’s band Jotta Herre, but a month later it was also recorded by the singer Carlos Mendes, a member of the Portuguese group the Sheiks until 1967.

Artwork : McCartney’s profile in the artwork for the front cover reused a portion of the illustration from the Beatles’ album Revolver, and Lennon’s profile is a drawing that duplicated the back-cover photograph from his album Imagine. (Wikipedia)

This is an album that should be in the collection of every Beatles fan but most likely isn't as it's been out of print for many years. It's a shame as most of it is quite good.

Posted by Butterboy at 3:11 PM